With the nine-in-one elections approaching, the Taiwan FactCheck Center (TFC) has noticed the spread of political misinformation appearing on various social media platforms and messaging apps.

In order not to fall prey to false information, readers should first fact-check the questionable sources with the TFC.

Misinformation and disinformation campaigns targeting Taiwan’s elections are nothing new to the TFC, as fact-checkers have seen them play out during the 2020 presidential election, the Kaohsiung mayoral recall election that same year, and also the four-question referendum in 2021. In each of these past events, the TFC had to investigate these questionable sources meticulously. 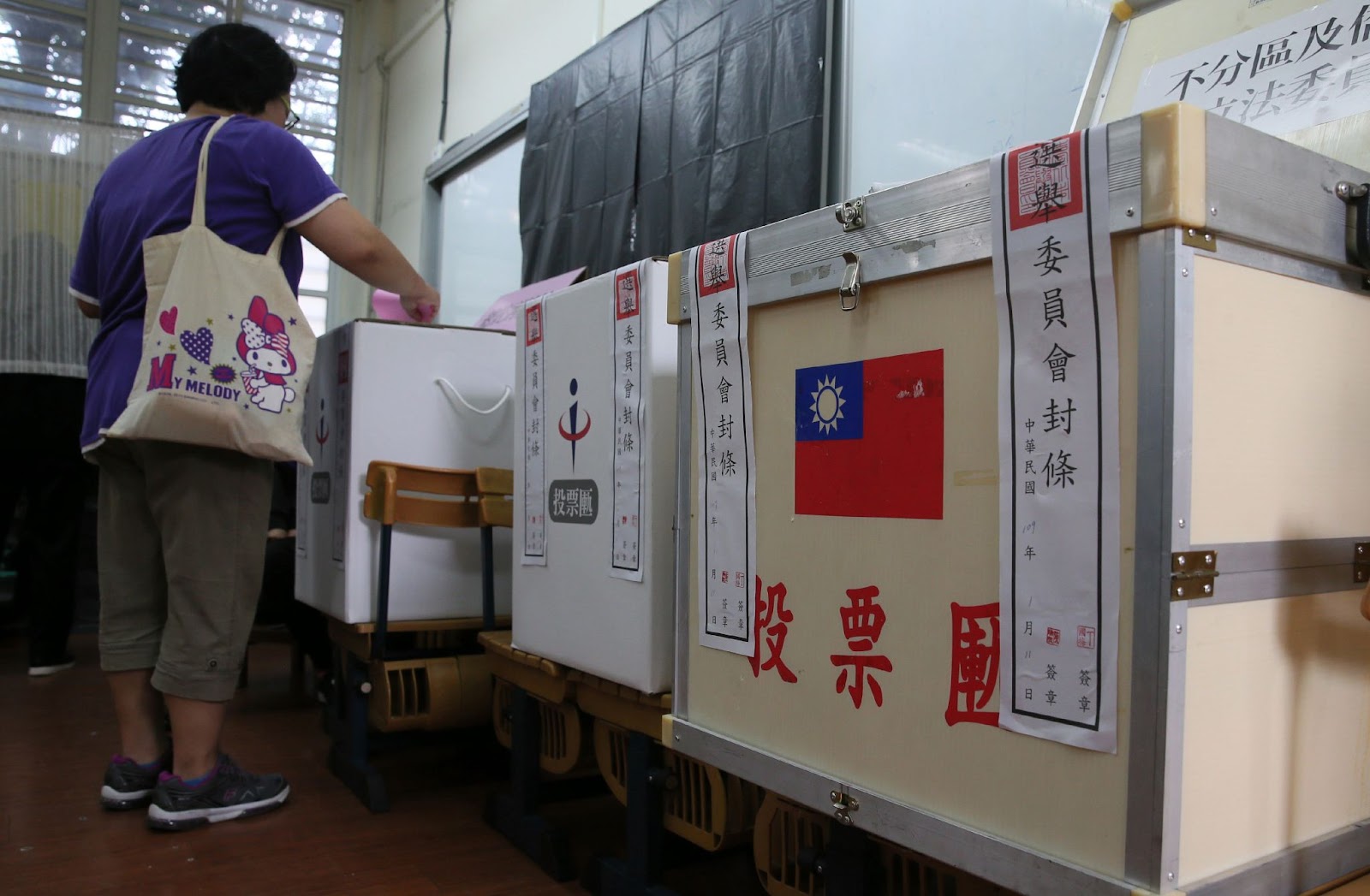 Image: People vote for the Presidential election in Taipei City, Taiwan on January 11, 2020.( The Yomiuri Shimbun via AP Images )

Tricks in the playbook

The TFC’s “misinformation playbook” provides a rundown of rumors that are commonly told in the lead-up to the elections, on election day, and even after the counting of ballots.

Members of the public are advised to familiarize themselves with this playbook, which aims to provide useful resources and recommendations on how to navigate information threats targeting elections.

As have been observed in Taiwan’s past elections, conspiracy theories involving election fraud often emerge on social media platforms and messaging apps days before the election.

As voters head to the polls, the disinformation campaigns have been to discredit the Taiwanese election about its transparency.

One notable example the TFC noticed recently pertains to the cardboard ballot box, as some have alleged that they are made opaque to deliberately facilitate vote rigging, while others also say Taiwan needs to adopt see-through acrylic ballot boxes to make voting more transparent.

The boxes are in fact provided this way to protect voter privacy.

Another type of attack is falsely alleging that the Central Election Committee (CEC) is able to use a computer counting system to rig the ballots. Such unfounded claims were told during the Kaohsiung mayoral recall election in 2020 and the national referendum last year. This false accusation is once again targeting the upcoming local elections.

Truth is, all the ballots are hand-counted in Taiwan.

When the poll closes, all polling stations will be rearranged for vote counting. Station staffs are required to take each ballot out of the box one by one consecutively, read the vote out loud, and display it to the attending public witnesses.

But the disinformation doesn’t stop there, as there are also fabricated stories alleging that because the CEC chairperson is appointed by the ruling political party, the latter is in a position to easily handpick the staffers at polling stations to serve its interests.

People working at the polling stations are in fact both civil servants and election officials comprising of all levels of staff, hence the assumption that they are all politically appointed is a bit far-fetched. 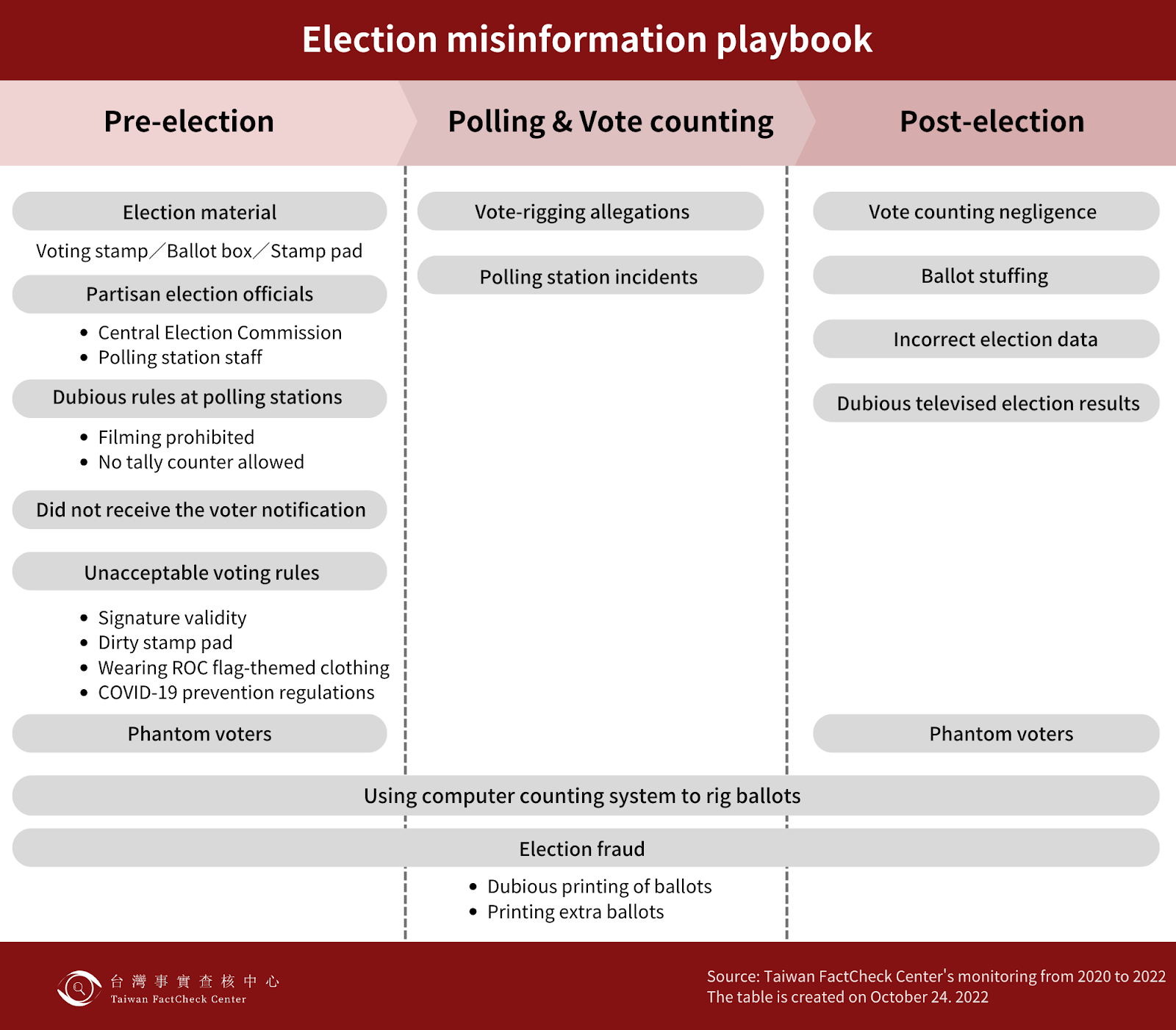 One example is a misleading video released two years ago on Taiwan’s 2020 presidential election that has been debunked by the TFC. In one of the scenes, it alleged that the election staff was stealing votes from a certain candidate and recording only the ones that went to Tsai Ing-wen.

In fact, the video was deceptively rearranged in a manner to misrepresent the scene in order to mislead the viewer.

Fact-checkers at the TFC are urging people who receive messages of alleged election fraud first to compare them to other news sources to get different perspectives.

After the results of an election are announced, the days that follow can be rife with misinformation, with the intention of creating conspiracy theories involving election fraud and vote rigging.

Such examples were observed in the post-election of 2020, with many misleading reports on social media claiming that the votes were rigged with ballot box stuffing. Some stories were even beyond absurd, implying that the Central Intelligence Agency in the United States had provided a special ink to help the Taiwanese ruling party rig the elections.

The independence and transparency of Taiwan’s elections should be jointly monitored by its people. However, misinformation and disinformation can threaten the foundations of democracy.

Fact-checkers at the TFC have two secret weapons - "election fact-checking" and "misinformation playbook." TFC encourages the public to use these two knowledge tools to defend against election misinformation.

Image: People vote for the Presidential election in Taipei City, Taiwan on January 11, 2020.( The Yomiuri Shimbun via AP Images )