Hoaxes and falsehoods started to spread rampantly on social media ahead of U.S. House Speaker Nancy Pelosi’s visit to Taiwan, not to mention when China later announced its biggest-ever live-fire drills to encircle Taiwan, images of drills and Chinese troops gathering - both verified and unverified flooded the Taiwanese internet.

Mrs. Pelosi is the highest-ranking U.S. official to have set foot in the country in 25 years. While her flight departed from Malaysia was in the air, more than 700,000 people logged on FlightRadar 24 to watch the flight path. Rumors of her aircraft malfunctioning, and even crashing were also in the air.

The misinformation wave dated back to July 31, whether Mrs. Pelosi’s Asia trips included a stop in Taiwan remained unclear and China was fiercely trying to hold her back, videos appeared on Twitter with English texts indicating China conducted a real-fire fire on Pingtang island, China’s closest point to Taiwan's mainland.

Taiwan FactCheck Center (TFC) immediately debunked the video and showed that the video was actually the drill by Taiwan Army in 2020. 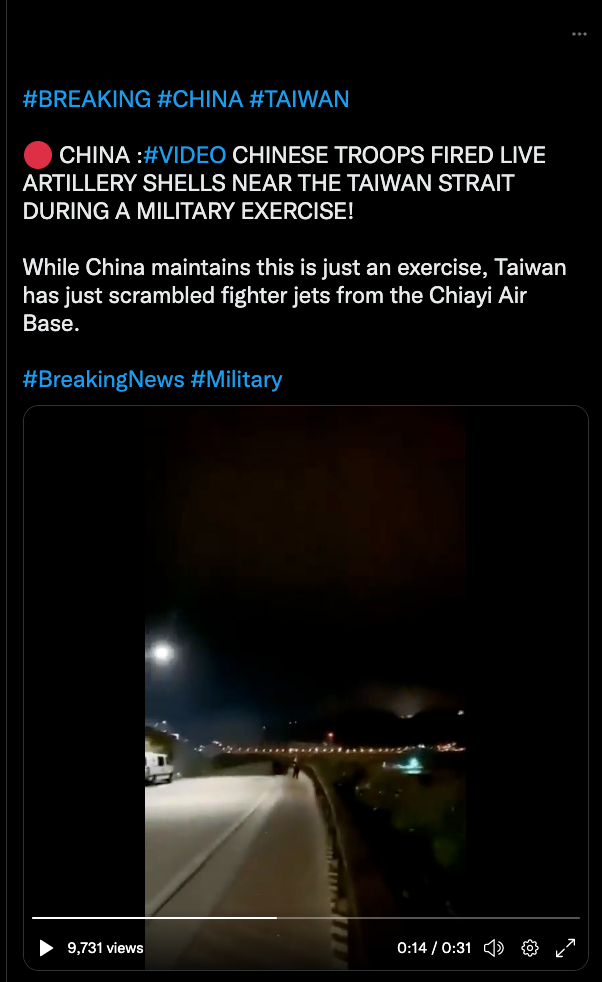 Videos purporting to be China holding a live-fire military drill in the Taiwan Strait. However, the viral video shows the drill held by Taiwan in Matsu on Nov 6, 2020

Meanwhile, a large number of videos allegedly showed dozens of tanks and other armored vehicles and equipment gathering in Fujian Province were detected by the TFC team.

On the day of Pelosi’s arrival, the images circulating online seemed even more terrifying: online videos and images saying the Chinese People's Liberation Army (PLA) was deployed in Xiamen, which is just 5 km across the water from the Taiwanese outlying Island.

It was challenging for Taiwanese fact-checkers to verify these images independently. However, among them, one image was debunked by TFC who found out the photo was from North Korea's drills back in 2017. 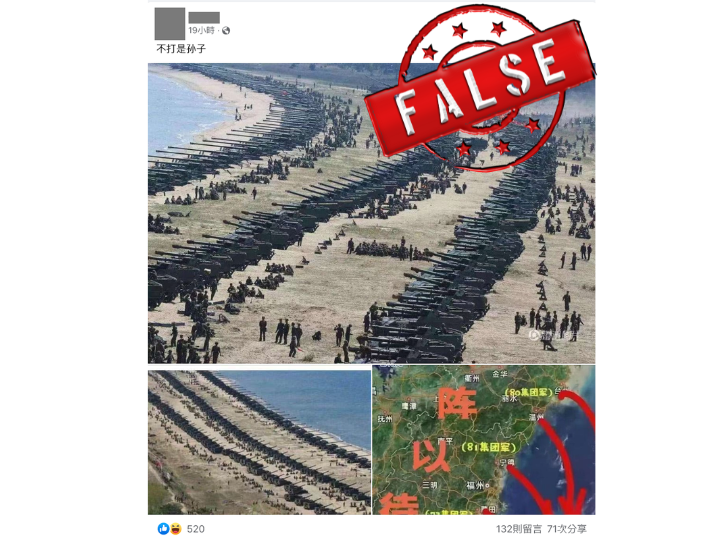 Photos appearing online from Aug 2 claim to show Chinese troops mustering off its coast opposite Taiwan. However, they are old images from North Korea's drills back in 2017.

Experts believe the series of out-of-content drills images was meant to intimidate the island’s people.

WenCheng Fu (傅文成), a professor and the head of the department of journalism at National Defense University, said, these images seem to be taken from previous military drills based on the types of weaponry, uniforms of soldiers, and street views shown in the images.

“It is simply not the correct type of weaponry when preparing for a war in the Taiwan Strait,” Fu said.

For instance, viral footage on Weibo that claimed to show PLA sending rockets to Fujian turned out to be false. The weapons on the vehicles, which could be seen in the footage, are for defense. They are not related to military drills. 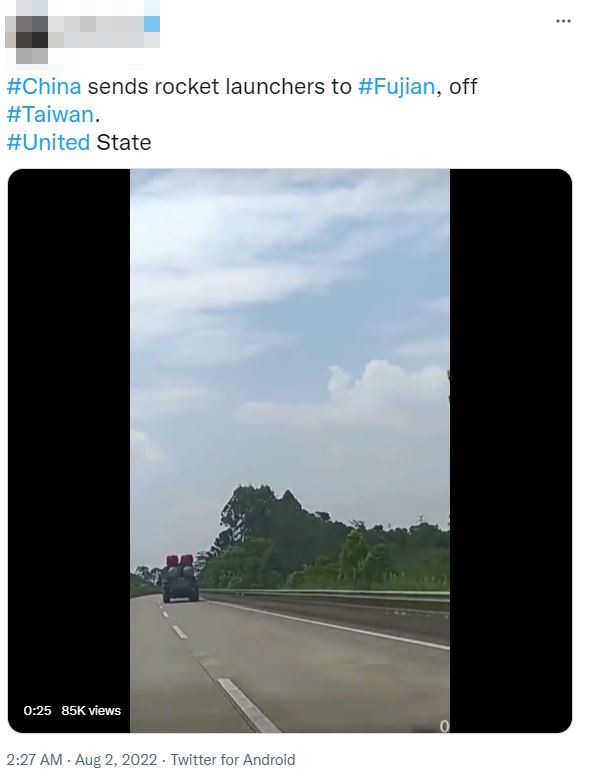 A video was falsely linked to the current military drills.

Another military expert, who wishes to remain anonymous, believes these images of troops serve a particular purpose as propaganda towards its own people. The disappointment over Pelosi’s visit to Taiwan and China’s response is so high that it put pressure on China.

Since the first fact-check on the out-of-context drill video was published on July 30, TFC has debunked at least eight false claims or images purporting to be Chinese drills, as of today (Aug 12).

Misinformation spread from English Twitter to Chinese Weibo, and ends on Taiwanese social

“Interestingly, we found most false claims and out-of-context videos first appeared on Twitter in English language and then spread on Weibo,” Summer Chen, the Editor-in-Chief of Taiwan FactCheck Center said.

Both Twitter and Weibo are not popular in Taiwan which indicates the first wave of misinformation originated overseas. Weibo is a Twitter-like Chinese microblog where Douyin (the Chinese version of TikTok) videos often got reposted and spread misinformation.

Despite some of the Twitter accounts that tweeted the falsehood being new, a fair amount of them shared disinformation on the Russian-Ukraine aggression previously.

However, as the Chinese languages in China and Taiwan are not dramatically different, it is easy for those false claims to transit to Taiwanese social media platforms such as LINE and Facebook and gets picked up by Taiwanese news outlets.

On that day later, a photo released by PLA's eastern command and China’s Xinhua News Agency shows a Chinese soldier with binoculars observing the Taiwanese naval frigate Lang Yang and what appears to be the Heping Power Plant in Hualien.

The picture was widely used by Taiwanese and international media such as Financial Times, Deutsche Welle, and Der Spiegel, as Xinhua supplied content to AP news agency on Aug 5. Some of these media attributed the photo to AP and didn’t mention Xinhua in the caption which created the false sense that AP’s photographer took the photo. 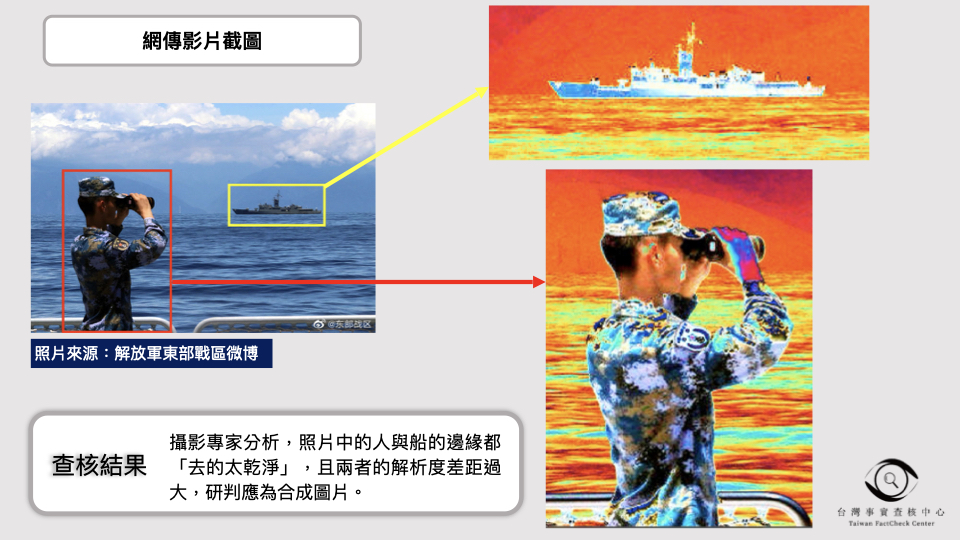 Many signs indicate the photo is altered, according to experts from different fields. For one, the resolution contrast between the soldier and the frigate suggests that these two images have been photoshopped together.

But the photo seems suspicious to the Taiwanese fact-checkers. After three days of research and interviews of almost a dozen experts with different specialties, TFC published a fact-check suggesting the photo is altered on August 9.

In response to queries from news outlets about the veracity of the photo, AP sent an advisory to all its customers on Aug 11.

“While we understand that some news outlets are questioning the authenticity of the photo, the AP cannot immediately detect a problem with it,” the advisory said. “Because AP didn’t take the photo and doesn’t have access to the source files, we can’t authenticate it either.”

In another fact-check, the TFC team used SunCalc, an application to ascertain the time by the sun movement to debunk a Chinese tech’s Weibo post which claimed that its satellite image could prove the authenticity of the controversial photo. 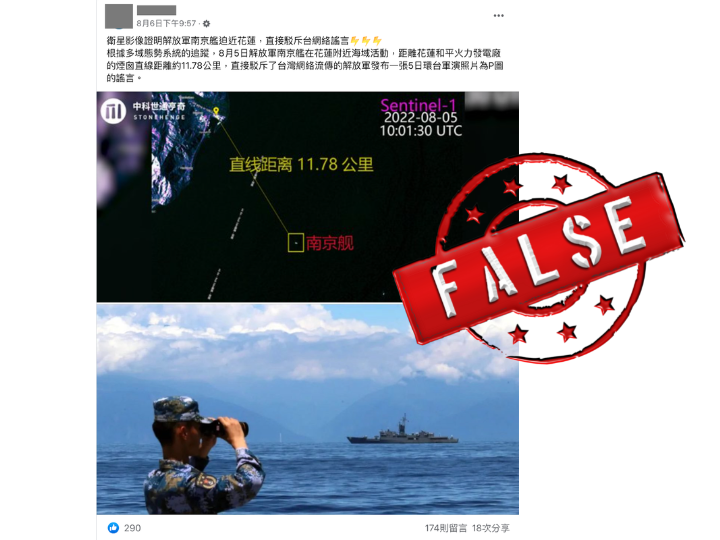 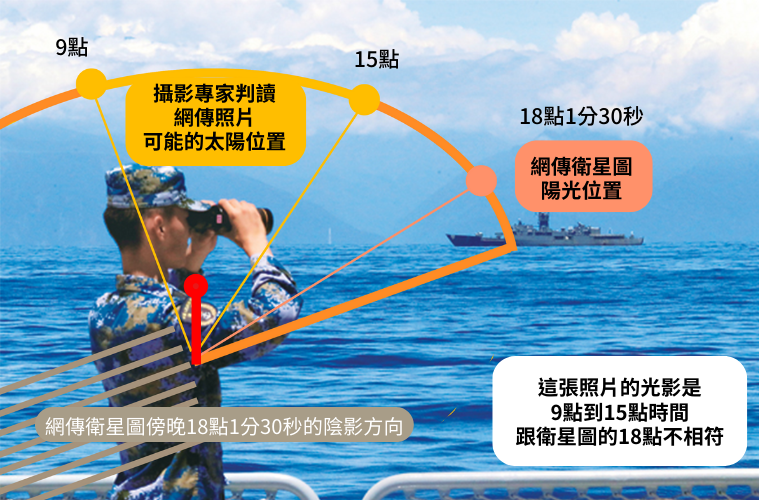 A satellite image purported to prove the authenticity of the controversial photo of the Chinese soldier observing a Taiwanese frigate near the Taiwanese coastline. However, the sun movement on August 5 didn't corroborate the claim.

Disinformation to disturb and sow divisions in Taiwanese society

Besides fear-mongering drill images to wear down Taiwanese people, Summer Chen said her team debunked other disinformation aimed at disturbing and sowing divisions in Taiwanese society.

An image of Chinese CCTV news on which a text overlay saying China is evacuating its citizen from Taiwan appeared on the Taiwanese bulletin board system, PTT on August 4. Although TFC quickly debunked the fabricated image, aggressive online posts and comments continued to attack Chinese immigrants in Taiwan. 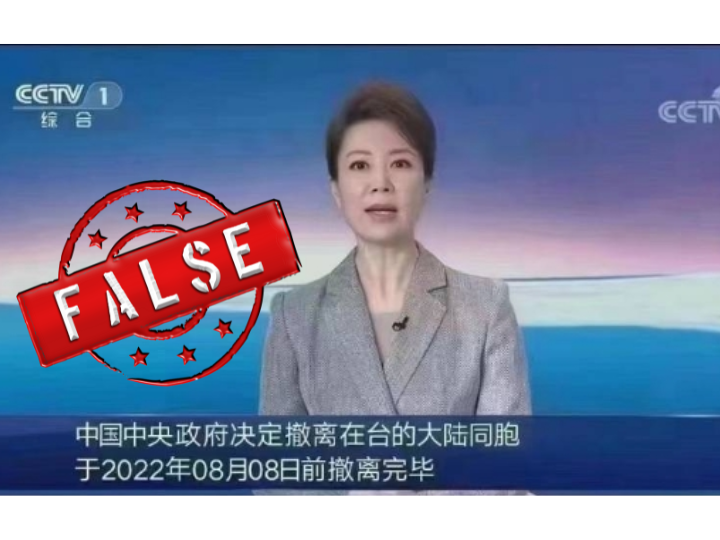 There is also a false accusation targeting the Taiwanese president Tsai Ing-Wen and her administration.

Also first appeared on PTT, a document image purporting to be captured from the website of the U.S. Department of Justice and showing that Taiwan paid over $3 million hiring a public relations firm to lobby Mrs. Pelosi and paid for her trip to Taiwan.

But the document is fabricated. The signature on the document and stains around it are identical to another file on the U.S DOJ’s website. This alleged document can not be found on DOJ’s site either. 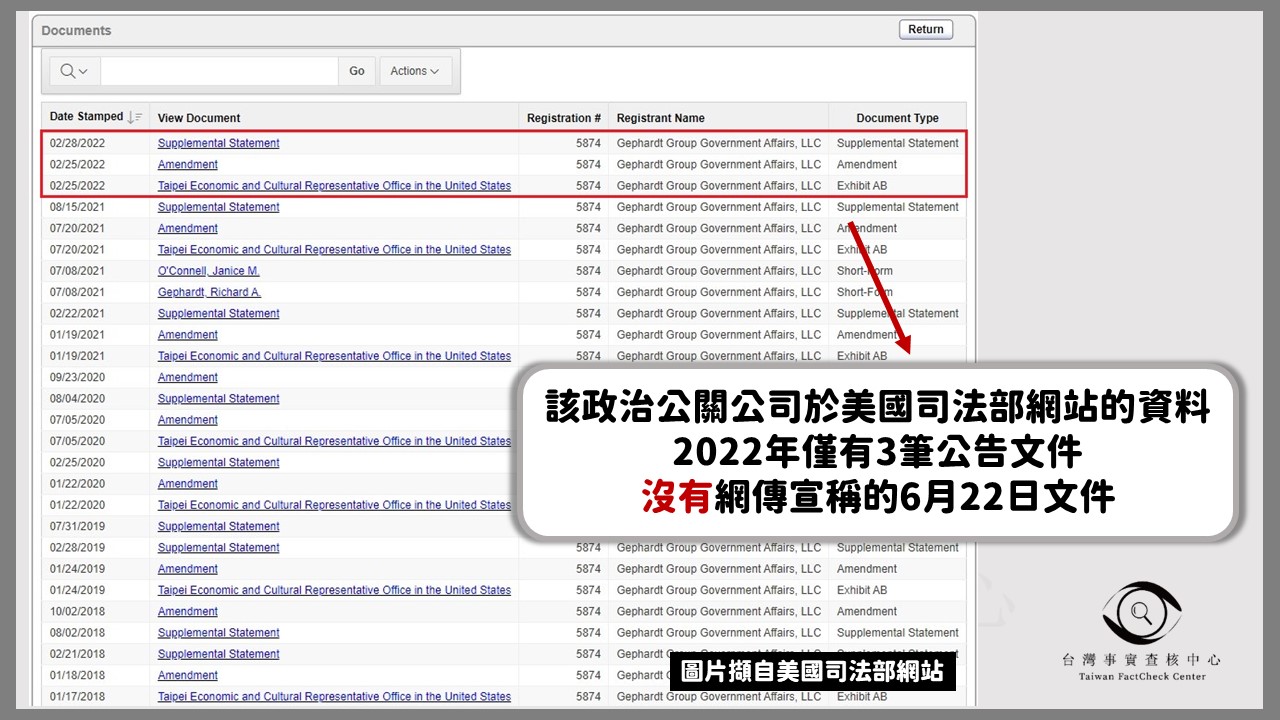 Over the course of the event, the Taiwanese were also witnessing large-scale cyberattacks, aside from intimidating false images and videos.

A number of Taiwan government agencies and infrastructure websites have been hit by cyberattacks including Taiwan’s presidential office since August 2.

The websites of National Taiwan University were hacked when they were found to display words that read “There is only one China in the world” in simplified Chinese; 7-Eleven stores' TVs were hacked, too, and displayed the message 'Warmonger Pelosi get out of Taiwan.” 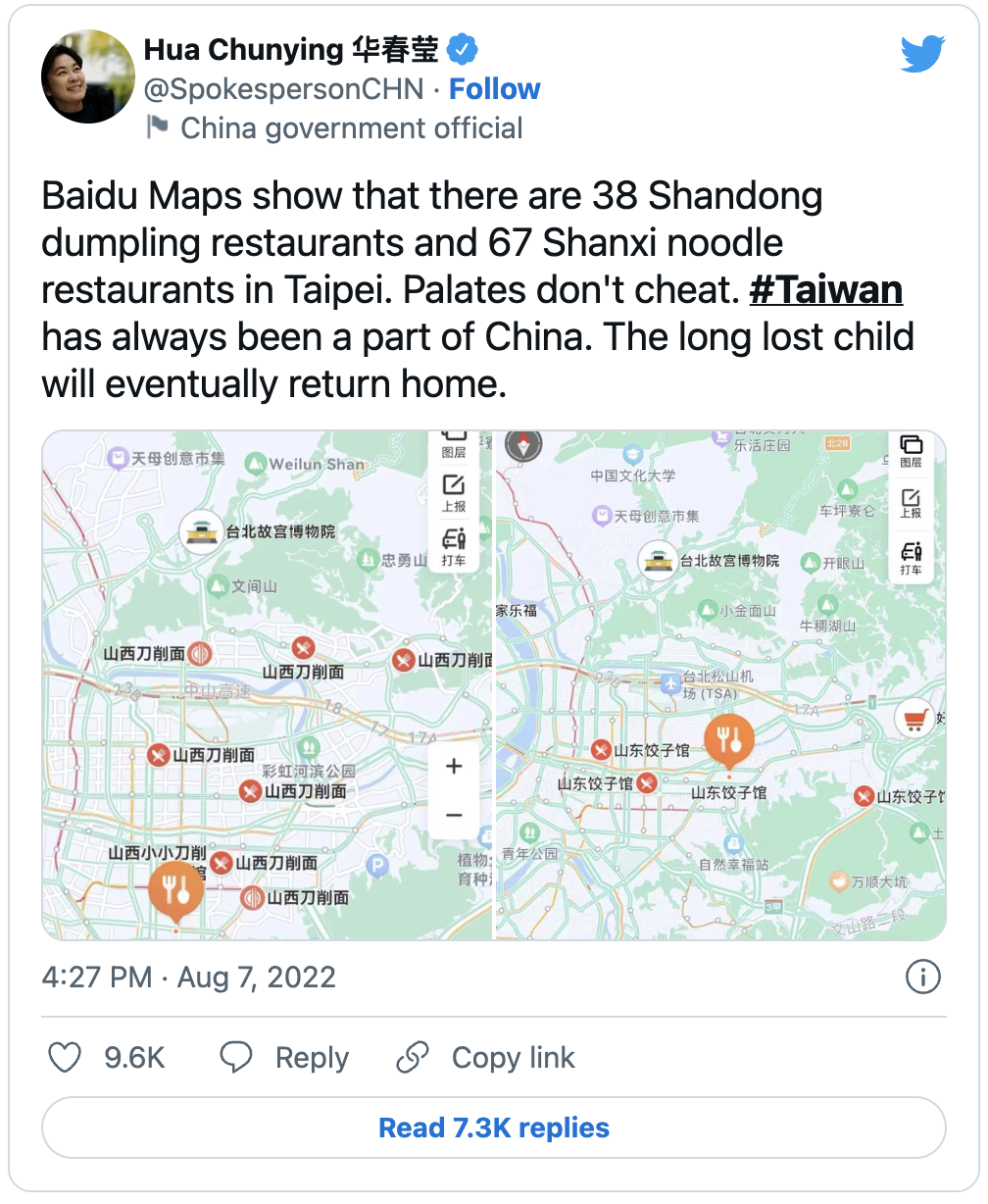 In response to the turbulence of information, TFC has taken immediate actions to counter the spread of falsehood and empower the public to tell fake military news from facts.

All its work is wrapped up in the dedicated webpage. Additionally, TFC also maps the major narratives the team has been monitoring along with their fact-checks chronologically in a timeline to help researchers understand how the claims and discourses evolved through the course of the event. 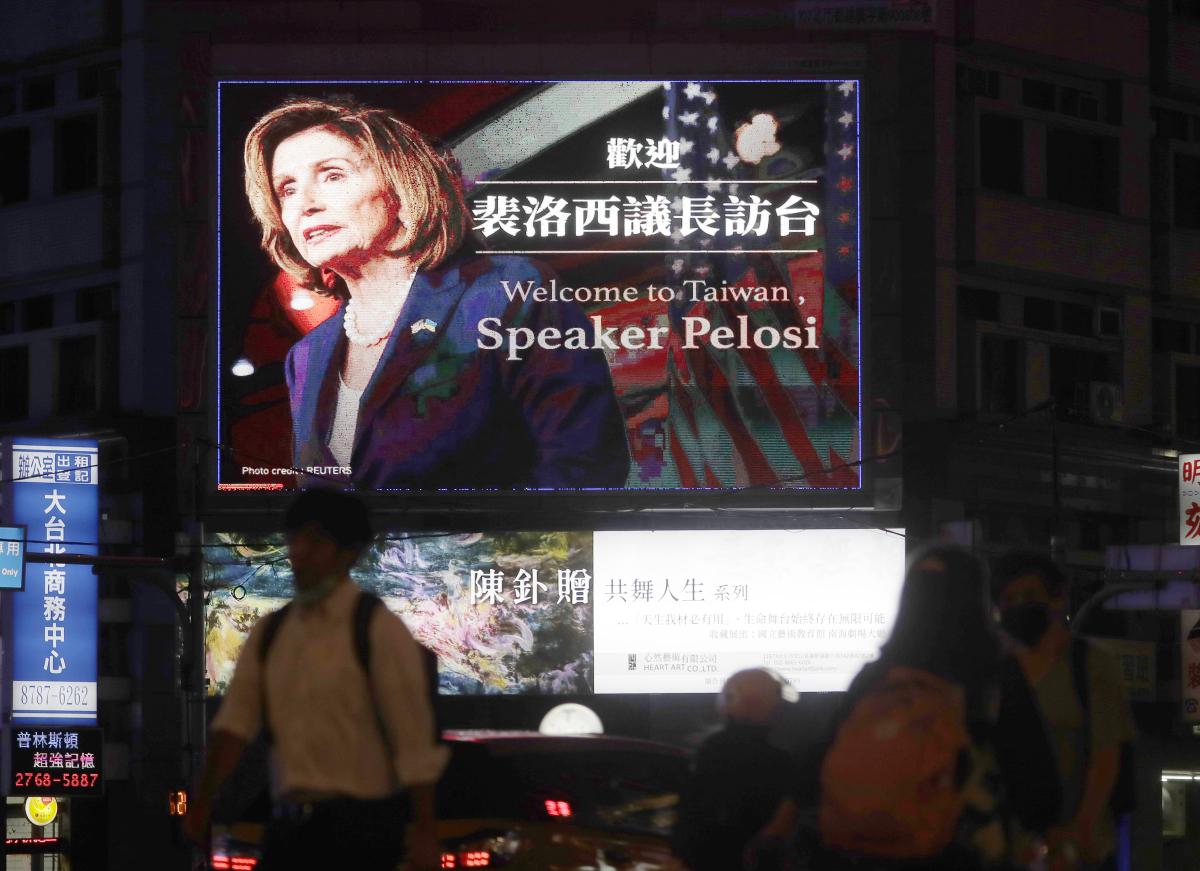 Image: People walk past a billboard welcoming U.S. House Speaker Nancy Pelosi, in Taipei, Taiwan, Tuesday, Aug 2, 2022. Pelosi has arrived in Taiwan and becomes the highest-ranking American official in 25 years to visit the self-ruled island claimed by China, which quickly announced that it would conduct military maneuvers in retaliation for her presence. (AP Photo/Chiang Ying-ying)