As the world ages, the not-as-tech-savvy elderly who are more susceptible to disinformation has come to attract more attention.

The Taiwan FactCheck Center (TFC) brought local experiences in helping senior citizens discern fake news to an international summit that saw the participation of 500 plus fact-checkers from more than 60 countries around the globe in Oslo, Norway this past June.

The participants gathered with the aim of learning from each other on how to equip people with sufficient media literacy, as it has been increasingly recognized that rumors travel faster than fact-checking effort, and it is for online users to remain alert themselves in order for disinformation to be fought effectively. 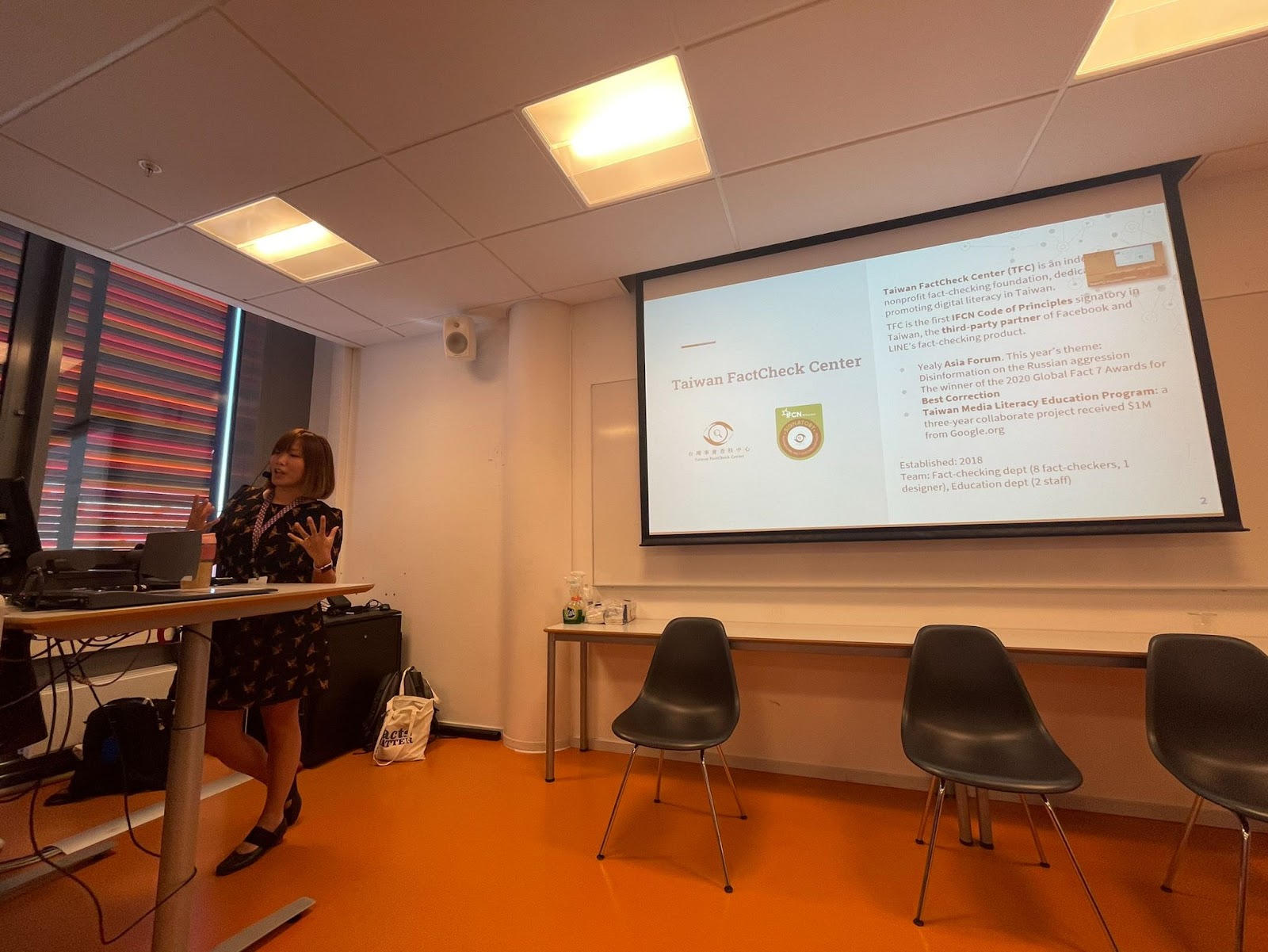 The TFC representatives presented to the audience the effort of the “Taiwan Media Literacy Education Initiatives” project in Oslo. (Photo: Huang Chao-hui)

A special session of media literacy track took place on June 24 for the discussion of the phenomenon that while older adults are getting hooked to smartphones, they are more likely to share bogus information as they are less familiar with social platforms. The recent events of the COVID-19 pandemic and political elections have shown that the consequences could be grave and even fatal.

In a classroom with 40 other fact-checkerrs from Turkey, South Africa, Mongolia, Jordan, Poland, Norway, Iran, and the Philippines, the TFC and MediaWise from the US shared their respective experiences in how they approached older adults and helped them become more digitally literate.

In the realm of promoting media literacy, targeting older adults is still an emerging field, with relatively few studies and strategies. MediaWise has a successful record of connecting older Americans to reliable information and helping them identify disinformation. With this experience, they have launched WhatsApp microlearning courses for older adults in Brazil, Spain, France, and Turkey, attracting more than 18,000 users as of June. 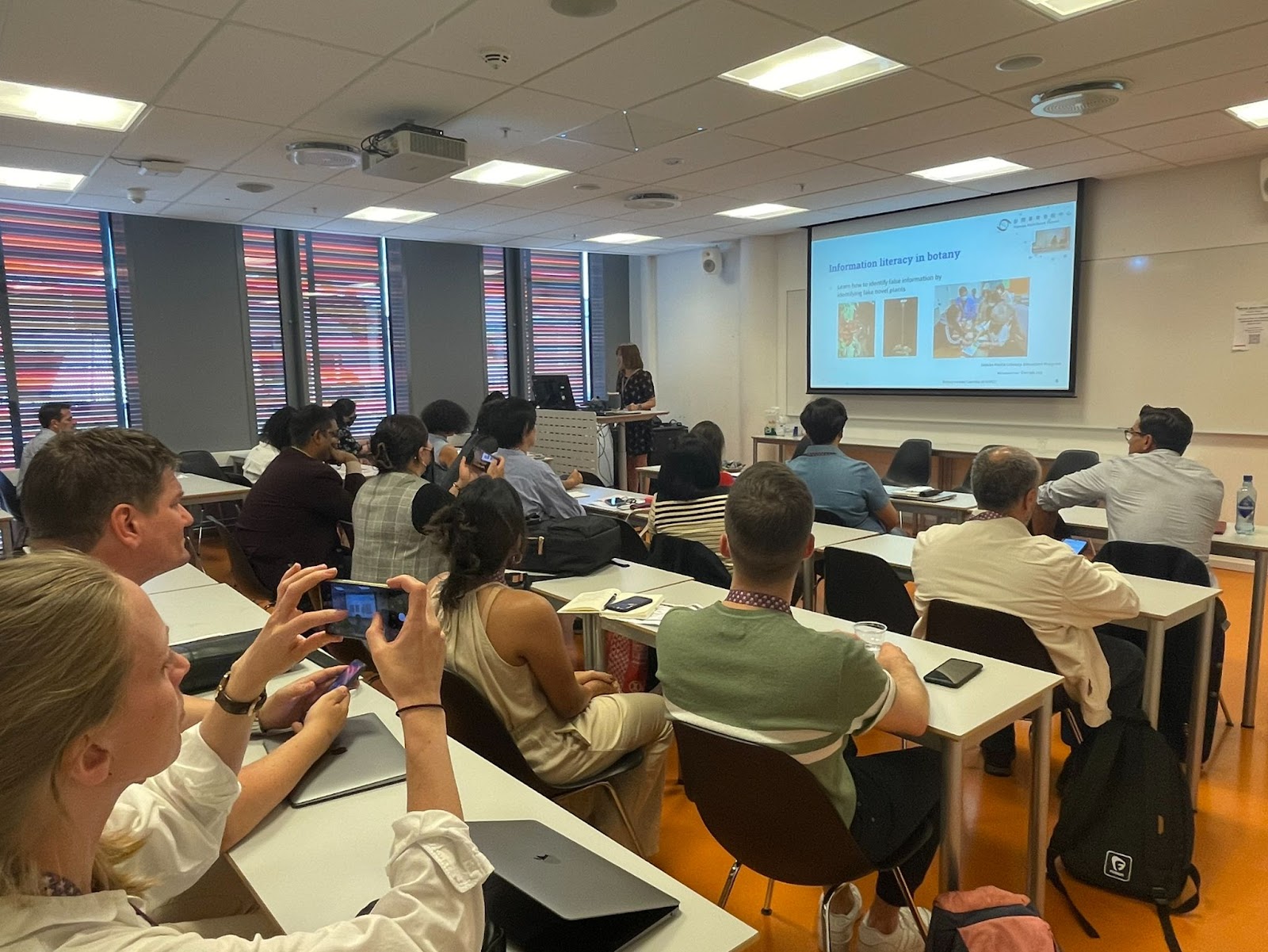 In a classroom of 40 fact-checkers around the globe, Taiwan’s TFC and MediaWise from the US shared their experiences in how they approached older adults and helped them become more digitally literate. (Photo: Huang Chao-hui)

Ho from TFC presented to the audience the effort of the “Taiwan Media Literacy Education Initiatives” project, headed by the TFC and supported by Google.org, in empowering digitally disadvantaged groups, including the seniors, with other Taiwanese civil group partners.

One of the initiatives was undertaken by the National Association for the Promotion of Community Universities, who integrated digital literacy into the class curricula of the local community colleges, students of which are mostly adults interested in lifelong learning and civic issues.

“More than 50 teachers teaching on a variety of subjects volunteered for the pilot programs,” said Ho, adding that the seed teachers in the pre-class training sessions and lesson plan workshops all strived to “blend” digital literacy into their courses.

One of the notable lesson plans was from the teacher of the class “Picture Books for Adults,” who chose a picture book about rumors to lead the students to discuss misinformation. Another interesting case was a teacher teaching about plants showing pictures of exotic plants for the students to determine their authenticity, and along the way sharing the traits of disinformation. 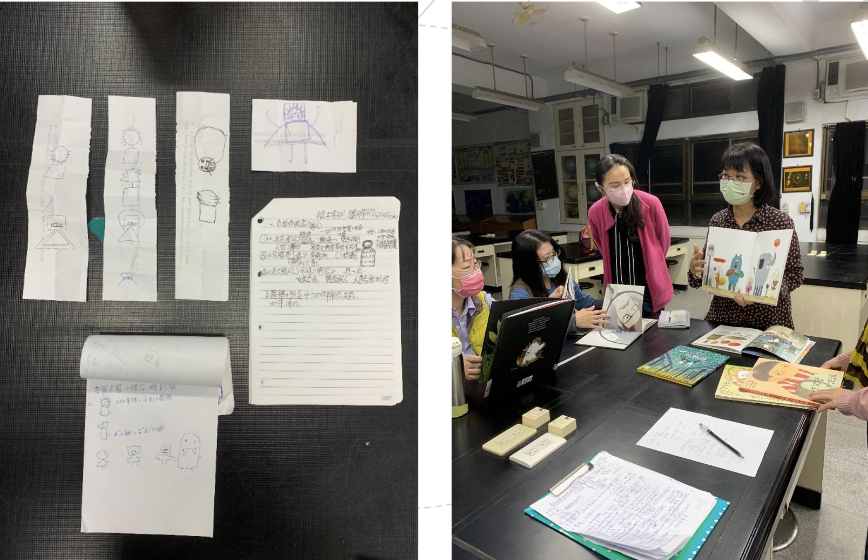 A community college teacher chose a picture book about rumors to lead the students to discuss misinformation in her class “Picute Books for Adults”, encouraging her students in critical thinking. (Photo courtesy: National Association for the Promotion of Community Universities)

Taiwanese civil group “Fake News Cleaner,” on the other hand, launched their fight against disinformation on the street. The group volunteers would go to local community centers, traditional markets, temples, parks, or hiking trail entrances, which are frequented more by the older people, to speak about media literacy and debunk fake news, putting emphasis on information about health and scams, the two topics that caught the elderly’s eyes most. They would also stage street Q&As with winning prizes to engage older people to chat and interact.

TFC also shared how it recruited a dozen of senior “seed instructors” on smartphone using, showing them how to use apps to spot fake news so they could pass on the information to their networks. And there are “tips” for giving lessons to the elderly, the TFC told the audience, such as that step-by-step operation instructions and hardcopy manuals are required for older people to practice, and video clips should be short and classrooms not too dim for the elderly to stay awake.

‘What they need is a successful experience’: Taiwan elderly learn to fact-check on their own, Taijing Wu, 2022-03-08