In December, a video showing the vice chairman of a civic association criticizing the gender equity education in Taiwan’s elementary and secondary schools began circulating on various social media platforms.

“The textbooks used by the school’s gender equity education committees tell students that it does not take a man and a woman to start a family, or go into marriage for that matter,” the individual named Chien Ta (錢達) decries in the video.

“Three men and two women, as long as they like, can start a family,” he says, but without providing any factual proof to support his claims.

In the video, Chien also accuses school committees of teaching students about the decriminalization of sexual assault, citing that committing a sexual act upon another, including against a minor, does not constitute a crime as long as there is an explicit consent from the other individual. 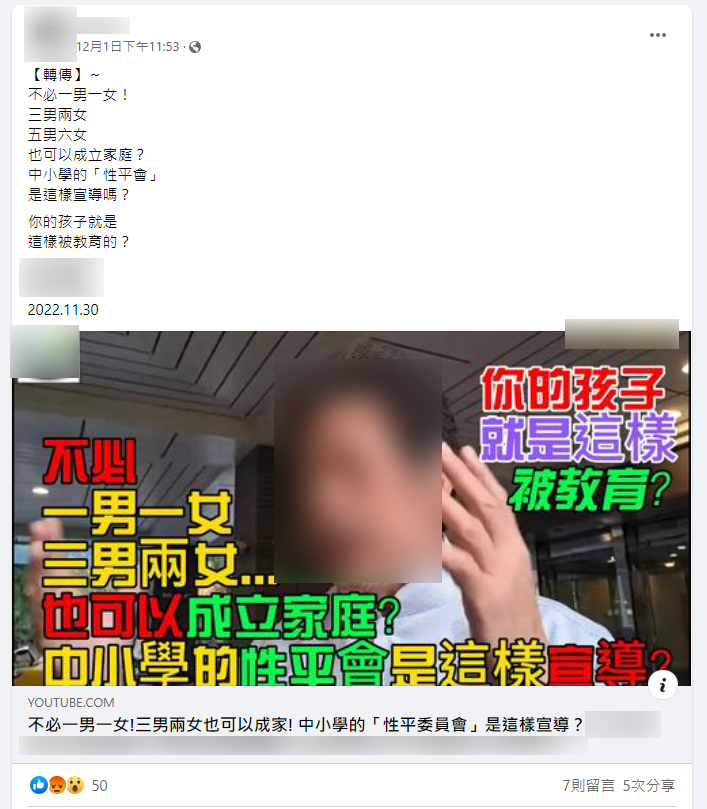 First of all, the gender equity committees that have been established across schools nationwide are not responsible for producing the materials on gender equity, the Taiwan Gender Equity Education Association (TGEEA) said.

They are instead produced by government-contracted publishers, with the materials reviewed by a school’s curriculum development committee, during which parents were also involved in the process, the TGEEA said.

The association, meanwhile, rebutted Chien’s claims that the textbooks on gender equity contains passages that read “three men and two women, as long as they like, can start a family.”

He was vague to say the least, it said, as a family comprising a married couple and their adult son living together with their parents in the same household can be defined as “three men and two women.”

Lin, who had been involved in compiling several chapters of the curriculum on gender equity, said there is no way such inaccurate information could be included in the teaching materials, which have to be approved by the K-12 Education Administration under the Ministry of Education before being adopted by a school

Lin Meng-huang (林孟皇), a Taipei District Court judge, said marriage is the lawful union between two people, and even with legalization of same-sex marriage in Taiwan, the matrimony does not include multiple couples.

Lies about the decriminalization of sexual assault

The presence or absence of sexual assault is determined subjectively by an individual, but when the consensual sex involves someone aged 14 years old or younger, it is still considered a crime in Taiwan, Lin Meng-huang explained, debunking the claims made by Chien.

According to Primordial Law Firm lawyer Yen Hung-yi (顏紘頤), a person who commits an obscene act against a male or female who is under the age of 14 can receive a prison sentence of between six months to five years.

Furthermore, Yen said perpetrators who commits an obscene act against a male or female who is over the age of 14 years but under the age of 16 is liable to a prison sentence of less than three years.

Fact-checkers at the TFC also uncovered recently a misleading message that has spread on various social media platforms about HIV/AIDS infection associated with same-sex marriage.

“After the legalization of same-sex marriage in Taiwan, grief! Almost 90 percent of HIV/AIDS patients were men who had sex with men,” the post read, and that “the number of new HIV/AIDS cases in Taiwan continues to increase at a rate of 6 per day.”

It also taunted Taiwan’s sexuality and gender diversity, hence the reason the number of HIV/AIDS patients in Taiwan is significantly higher than those in Japan and South Korea.

The fabricated story was accompanied with a chart that compares the population of Taiwan, Japan and South Korea, as well as the number of HIV/AIDS infections in each country. In the post, it states that Taiwan receives roughly 2,400 new cases each year.

The secretary general, who is also a physician at National Taiwan University Hospital’s Infectious Diseases Division, said the total number of people infected with the disease that year was 1,346.

As such, claims that Taiwan receives six new HIV/AIDS cases per day has been totally fabricated, she said.

The number of confirmed cases in the country has declined for four consecutive years, and even after the legalization of same-sex marriage in 2019, it continues to show a downward trend, she added.

The number of confirmed HIV/AIDS infection cases in Taiwan since the legalization of same-sex marriage in 2019. (Taiwan CDC)

Ivory Lin (林宜慧), secretary-general of the Persons with HIV/AIDS Rights Advocacy Association of Taiwan (PRAATW), believes the data provided in the chart are outdated.