TFC aims to raise awareness of scams as disinformation

TFC aims to raise awareness of scams as disinformation

Scam messages are one of the most fact-checked disinformation done by the Taiwan FactCheck Center. The recent hubbub about Taiwanese job seekers being lured to Cambodia over fraudulent job advertisements has also highlighted the need to debunk job scams. In response, the TFC has set up a special section on its website dedicated to raising anti-scam awareness.

Scam messages and ads come back with different details but similar forms every now and then, unkillable and undeterred, and thus are also called “zombie rumors.” The most commonly seen scams in Taiwan these days take the forms of one-page advertisements on the social media platform, false surveys dangling “free” rewards, and, in times of the pandemic, the COVID-19 relief application. Recently news about Taiwanese having fallen for job scams and were forced to labor, “resold,” and trapped in foreign countries have also surfaced and abounded. These are disinformation with serious and even fatal consequences.

TFC has set up a special section on its website dedicated to raising anti-scam awareness.

The news about Taiwanese people trafficked to Cambodia over job frauds has raised concerns over fraudulent ads with bogus promises luring job seekers to foreign lands. The TFC has published a report cautioning people against job posting with “too-good-to-be-true” terms and without clear company details or work information.

However, the TFC has also noticed that in the wake of the news about the online scams and human trafficking in Southeast Asia, where victims were reported to be forced to engage in cyber frauds, imprisoned, beaten, and resold, disinformation concerning the crime and the region has also emerged and if not stemmed would stir up unnecessary panic and induce harmful stereotypes against other countries.

For instance, a piece of gruesome video footage showing organs extracted from dead bodies has been circulated with the message claiming it to be the result of being lured to Cambodia. It has since been debunked to be footage from Russia that had been falsely used in different versions of disinformation in various countries.

A false post was spreading online claiming to show images of a Taiwanese victim of Cambodia job fraud. The image is however concerning a crime in Thailand dated back to 2019.

Phishing messages have increased during the pandemic. The scammers used emails, texts, line messages, and fake websites, posing as the Ministry of Health and Welfare and using misleading domain names such as “daygov.tv”, to trick people into revealing their personal information and steal their money. They duped people easily because as millions of cases have been confirmed in Taiwan, there were real needs for relief or people indeed had applied for relief online before.

An anti-scam expert told the TFC that the fake website addresses pretending to be governmental could change several times a day. In August, at least 665 variant addresses were detected, meaning that about 20 a day were created for the purpose of phishing.

Beside COVID relief, there were also surveys pretending to be issued by the government or businesses. These fake surveys would ask for sensitive information which could lead to empty bank accounts and urge the readers to pass on the message to their family and friends.

Recent scams included survey requests promised with coupons by impersonating Taiwan’s state-owned petroleum company, the CPC Corporation, and PX Mart, one of Taiwan’s largest retail supermarket chains. There were also messages pretending to be from financial institutions, such as the Bank of Taiwan in the recent case, luring people into downloading unknown applications and surrendering personal information.

Taiwanese also often face the scam threat of the so-called “one-page shopping website.” They would appear as an advertising post of a certain shopping website on the social media platform, but the website address would be a random configuration and the website without business contact info. The price of the product promoted would be a lot lower than its usual cost, and while it would be possible to pay by “cash on delivery,” the buyer would only find out that it’s a counterfeit or not as advertised after paying. 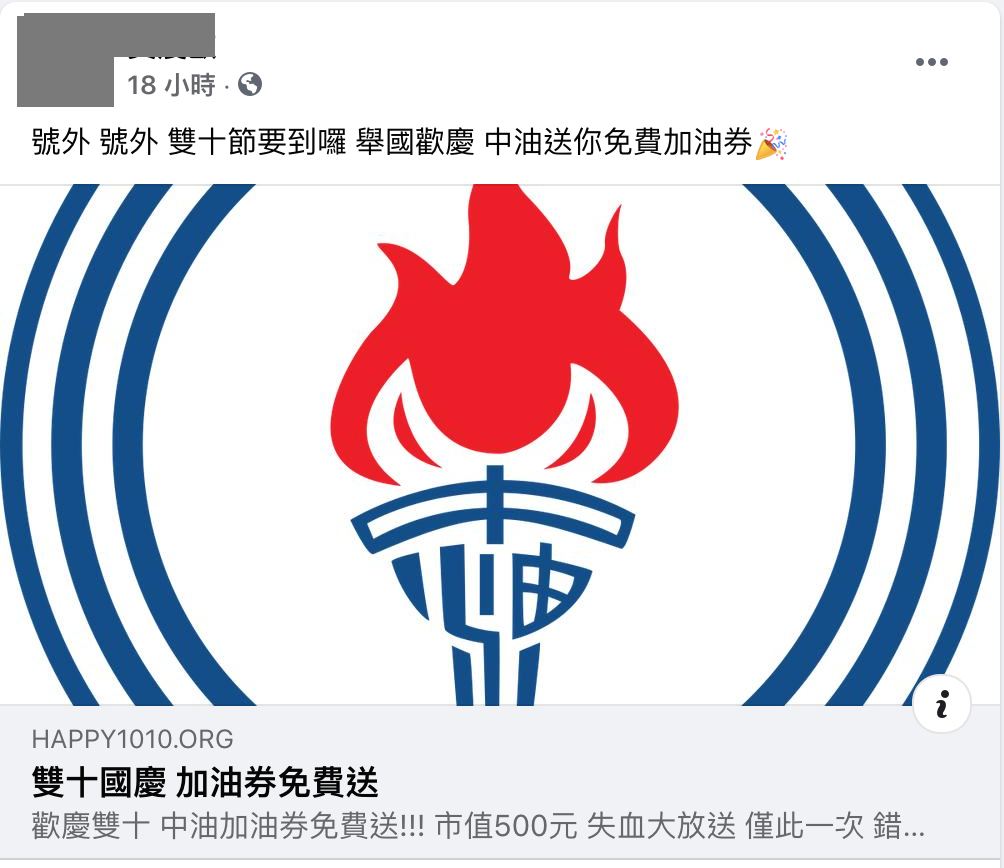 A screenshot of a survey scam promised coupons impersonating Taiwan’s state-owned petroleum company, urging users to pass on the message to their family and friends.

Feature image: In this photo released by the Cambodian police, a police officer stands by arrested Taiwanese and Chinese nationals in Phnom Penh, Cambodia, Tuesday, Aug. 30, 2016. Cambodian police arrested 63 people from mainland China and Taiwan on Tuesday, accusing them of taking part in an internet scam. (Cambodian Police via AP)