The COVID-19 pandemic in Taiwan has nurtured rumors in all their aspects possible within the society. This reflects how much people are concerned and discussing about it. Such a phenomenon is also followed by the vacuum of reliable information within the society.

During the online seminar “2022 Pandemic and False Information” on April 13, 2022, Taiwan FactCheck Center (TFC) Editor-in-Chief Chen Hui-min said there were three peaks in the surge of false information in the past two years. Till the day of the seminar co-organized by Science Media Center Taiwan (SMC), TFC identified 462 rumors on the pandemic, including 202 related with the vaccines. The others were also related with the pandemic.

The first surge of false information

“The first peak was between January and April 2020, that was when Taiwan confirmed its first COVID-19 case till the lockdown of Wuhan City in China. All the people were on alert and spread large amount of information related with the pandemic, prevention measures and remedies,” said the editor-in-chief. According to Chen, the TFC has spent more than two years of its over-three-year-existence fighting false information about the pandemic and the vaccine, and this information is like the “anxiety thermometer” of the society, with the temperature going up and down following the pandemic’s course.

Chen has been a journalist since she was a student. At her graduation from school, she became a reporter for the Economic Daily News writing about cross-strait issues. She became the Editor-In-Chief for TFC in May 2019.

TFC is a non-profit organization jointly founded by Taiwan Media Watch and the Association for Quality Journalism. Its objectives are to conduct fact checks on suspicious information relevant to public affairs as well as to improve the information ecology and news quality in Taiwan.

According to TFC’s Chen, the second peak of false information was from May to August 2021, when the virus started to spread in communities. The virus variant at that time was the Delta variant. The Taiwanese society experienced a semi lock-down situation while the alert level was raised.

At this moment, TFC established a Line chatbot and cooperated with the Institute for Information Industry (III) in the making of a “rumor filter” with the help of artificial intelligence. This mechanism found out that Internet users reported a number of rumors that was five to six times higher than usual.

SMC post-doctorate researcher Sinead Chen said, “If it were not the work of TFC, we would not even be aware that the information we receive is false. People receive a multitude of information every day and lots of them are false. These rumors are of all aspects. If people are not careful enough, they might be manipulated by this information. This highlights TFC’s job in fact-checking on rumors.”

SMC Taiwan is a platform that connects journalists and scientists to provide evidence-based information through the media. It aims to build a knowledge network for the government, scientific institutions, scientists, the media and the public by translating complex scientific knowledge into a more accessible format for public consumption. 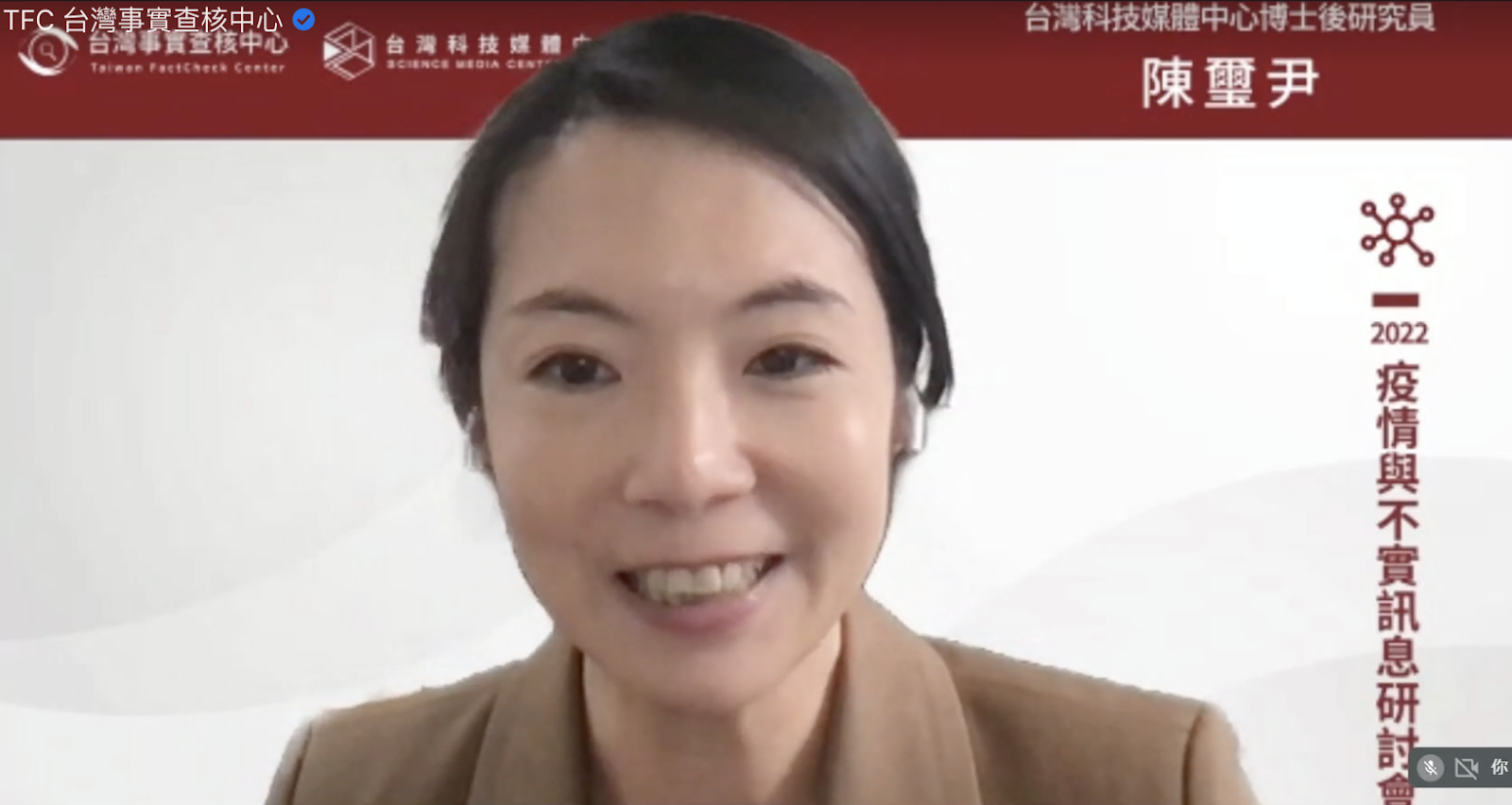 And the third peak was detected at the beginning of April 2022 with an increasing number of people infected with the Omicron variant.

“These surges in false information just reflect people’s anxiety during the pandemic. When something major is happening and people are not sure of what is really going on, rumors are easily nurtured,” said TFC’s Chen.

As a conclusion, Chen said that Taiwan’s society has already acquired a certain level of immunity on pandemic-related false information.

“The most precious outcome from the Taiwanese society during the pandemic, is that people here gradually developed a ‘rumor refuting mechanism’. During this ongoing period, people with higher awareness of digital literacy would send suspicious information to rumor-checking chatbots. Besides TFC’s LINE chatbot, Cofacts, Dr. Message, Auntie Meiyu and others count among the mechanisms people can trust. The fact-checking teams would release reports based on information provided by specialists and medical personnel. With the help of various platforms, we could reduce the spread of false information,” said Chen.